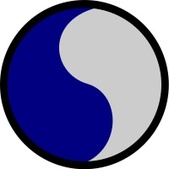 "Blue and Gray Division"
The 29th Infantry Division, also known as "Blue and Gray" was based in Fort Belvoir, Virginia. Formed in 1917, the division gained the nickname "Blue and Gray" because it was made up of soldiers from states on both sides of the Civil War. 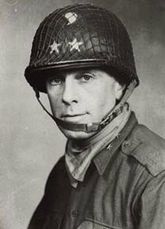 Maj. Gen. Charles H. Gerhardt
During the WWII, the division consisted of the 115th, 116th, and 175th Infantry Regiments; the 121st Engineer Battalion; the 104th Medical Battalion; and the 110th, 111th, 224th, and 227th Field Artillery Battalions. The division was sent to England where they trained for two years, from October 1942-June 1944, before participating in Operation Overlord. The division is best known for being the first wave of troops on the shore of Omaha Beach.

The 29th Commanding General at the time of the D-Day Invasion was Major General Charles H. Gerhardt. He started his command on July 22nd, 1943 and continued through to the end of the war to our occupancy of Germany. 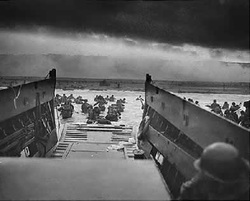 Soldiers exit the LST and head to the beaches
The division was sent to England on September 26, 1942 to train for the invasion of northern Europe across the English Channel. They landed in Scotland on October 5th and were sent to Tidworth Barracks in the southern England where they trained until the D-Day invasion. The cross-channel invasion of France came on June 6, 1944, during which the 29th landed on Omaha Beach.  Because of the rough terrain in the area and the bluffs that overlooked the beach, Omaha was known as one of the most challenging of the five beaches landed on. The beach had been well fortified by German soldiers in preparation of the invasion. Soldiers of the 29th Infantry Division landed in Landing Crafts and Landing Ships (LSTs). Soldiers also rode in on the USS Empire Javelin, the USS Charles Caroll, and the USS Buncombe County. 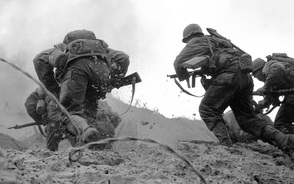 Soldiers running up the bluffs on the beach
On D-Day, when the first landing party left for shore the heavy seas and the shelling of enemy artillery caused boats to drift further from the landing spot. They launched the tanks too soon while they were in too deep of water, so most of them sunk and never made it to shore. The soldiers continued to try to land on the beach while being attacked by the enemy. Company A of the 116th Infantry was the first company to land on the beach. Company A was annihilated by enemy fire that prevented most of the men from advancing onto the beach. Because of continuous enemy fire and casualties the landings were stalled temporarily. Eventually the incoming force organized and landings were continued throughout the day. By nightfall, about 60% of our incoming forces had landed on the beach. On June 7,  reinforcements of 20,000 fresh soldiers landed onshore. By the end of June 7th, casualties numbered 6,500 American and 3,000 British and Canadian. It took American soldiers two days to conquer Omaha Beach.
The 29th Infantry took the bluffs on Omaha Beach and secured Isigny on June 9th. From there, they cut over the Elle River and headed toward St. Lo. They encountered tough and bloody hedgerow fighting along the way. They secured St. Lo on July 24th and then continued on to Vire, where they fought and took the city on August 7th.
The Allied need for ports influenced their next mission. They participated in the assault on the French port in Brest, August 25th- September 18th where a German division was defending a submarine base. The 29th was given a brief rest (about 6 days) after 3 months of heavy fighting and then on September 24th moved to defensive positions along the Teveren-Geilenkirchen line on the German border. They stayed there through October.
On November 16th, the 29th started its drive to the Roer River. They fought through Seirsdorf, Setterich, Durboslar, and Bettendorf before finally reaching the Roer by the end of the month.
They also reduced Julich Sportplatz and the Hasenfeld Gut on the 8th of December. From December 8th, 1944 - February 23rd, 1945, the 29th held defensive positions along the Roer River, while preparing for a future offensive drive. The offensive attack started on February 23rd and ran through Julich, Broich, Immerath, Titz, and into Munchen-Gladbach on March 1st. 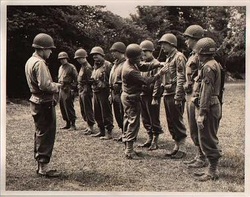 General Gerhardt decorates a soldier
In March the 29th Division helped to clean up the Ruhr region. On April 16th, the Division pushed towards the Elbe River. The 116th was the the first unit to make there on April 24th. The 29th set up defensive positions along the Elbe River and waited for advancing Soviet allies from the east until May 4th. During that time the 175th was helping clean up the Klotze Forest. The Soviets came into the 29th's area on May 2nd, 1945. On May 3rd, Brig. Gen. Sands, the Division Artillery commander, crossed the river to meet them. With Germany's surrender the 29th moved west and assumed occupation duties in Bremen and its port Bremerhaven. They stayed there until it was time to come home. The 29th Division was disabled on January 17th, 1946.
As the 29th advanced into Germany, it liberated Dinslaken, one of the German civilian labor camps.
The Homefront
Home