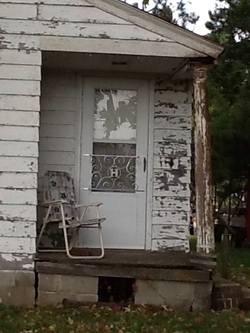 Gina Hexem's backdoor to her house.
Gina Hexem was born in 1907, to Andrew A. Hexem her father and her mother Maglie Hexem. Her family originated from Norway; she had one brother, named Andrew, after their father.  When Gina was sixteen years old and her brother was nine they lived on a farm outside of Hendricks, Minnesota. While living on the farm, John Fjeseth started working for Gina's father around the farm. Gina and John began to fall in love, but just as they did John was deployed, so they made plans to be married when he returned from World War II. While he was over fighting, Gina was going to college to be a nurse at Watertown's Luther Hospital Nursing School. After finishing nursing school she got a job being a surgical nurse at the hospital in Hendricks. She then learned of the death of John. She was now a single woman, living with her parents, and graduated from college. Later on she met Edwin Nelson, a farmer that owned a house and land outside of Hendricks, (shown in the picture on the left). They got engaged and were married in 1948. Gina continued to be a surgical nurse and Edwin kept farming. A few years after they were married and settled in Gina's mother came to live with them. After thirty-ones years of marriage, Gina was left with nothing. Both her mother and Edwin had passed away. Gina was a church goer throughout her life and also assisted the active local museum until her death in 2005. 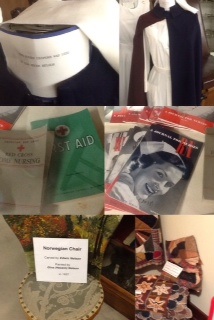 In the top two pictures shown is the nursing uniform of Gina Hexem, displayed at the County Museum in Hendricks. The middle pictures show nursing manuals Gina might have used. The bottom left picture is a chair that Edwin Nelson built, decorated by Gina. The bottom right is a quilt that she made.
Primary Sources
Home